On Tuesday October 22, 2019 Elon Musk sent the first tweet via his Starlink satellite constellation SpaceX has been working on since 2015. The goal of this product is to provide worldwide broadband space based internet that functions because of a series of satellites and on the ground receiving stations. This will help connect those part of the earth left without connection because they’re in remote areas.

I live in Mexico in a small town where internet can be spotty and it’s costly for what it is, so this news is extremely exciting to me. So far no prices have been shared as far as monthly cost of connection but the project was built on the idea that internet currently just costs too much.

This project began in 2015 with development of the satellites. SpaceX wanted something functional and durable but cheap. The project started in Redmond, Washington near Seattle with a projected capability to support 50% of backhaul communications traffic and 10% of local traffic in any major city. That’s a big claim but they’ve been doing well as far as achieving it has gone.

They initially hired 60 engineers but there are talks of an eventual 1000 people working on making this project a reality. By January of 2016 they had two prototypes for satellites with a promise for a working initial constellation by 2020. If Musks’ recent tweets don’t prove him right already, it seems like he’s well on his way to making it a reality on the projected time scale which is pretty amazing.

In 2017 SpaceX trademarked SpaceLink which became the name for the constellation, pretty fitting if you ask me. For the last several year they’ve had to do lots of requests for permission to launch their satellites, this month extending the original 12,000 satellite constellation to 42000 intended satellites this month. 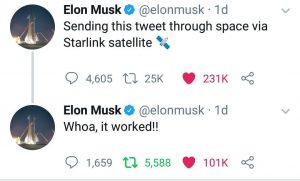 Not long after those tweets came out, suggesting they are well on their way to hitting the projected 2020 goal. There are some criticisms mostly people complaining about future possible space junk in the Earth’s orbit. There are also competitors like the OneWeb Constellation. The future is certainly bright for worldwide internet connectivity and as someone who likes to live in places where its difficult to get internet, like mountaintops, I’m extremely excited.