Throughout the nation, one of the hottest social and political discussions right now is whether or not we should legalize marijuana.  I believe that when examining what is known about the utility and the importance of the marijuana plant, specifically as it relates to health, it becomes clear what a grave mistake it is to deprive ourselves of this truly nutrient rich plant.   I believe that its cannabinoid compounds meet the definition of “vitamins”, not just any vitamin, but a vitamin that may be necessary for controlling our bodies ability to eliminate cancerous cells, in addition to supporting numerous bodily functions.(1)

It’s worth pointing out that this post is not about marijuana or hemp’s numerous other uses as a food, fuel, or fiber.

What is a vitamin?

d nutrition and are required in small quantities in the diet because they cannot be synthesized by the body.”

What is a “non-essential” vitamin?

A non-essential vitamin is an organic compound that is necessary for normal growth and function, that can be produced within our bodies.

What is a cannabinoid?

What do cannabinoids do?

Due to the broad range of tissues which demonstrate cannabinoid receptors, cannabinoids are reported to  have near panacea type benefits, both anecdotally as well as from orthodox science.  Perhaps most notably, cannabinoids demonstrate broad range anti-cancer benefits at even low doses, however some experts indicate that high doses are needed in the oral form (not smoked) for anti-cancer benefits.(4)(5)(6)  Also notable, are the reports of cannabinoids being effective in the treatment or management of autoimmune conditions.  Given the connection between disruptions in the gut lining and virtually every autoimmune condition known to man(7), one would expect to find some sort of regulatory action of cannabinoids in maintaining gut lining integrity, and research is clearly showing that to be the case.(8)

Currently, the governmental scientific research repository, pubmed ,returns nearly 12,000 research papers on the search term “cannabinoids”.  Clearly, the scientific community recognizes something very important here.  It’s worth noting that the US government owns a patent on cannabinoids due to their proven anti-oxidant and neuro-protective effects, which should seem odd since one of the prime justifications for not allowing medical marijuana to be legal in every state is that our governmental overlords claim that marijuana lacks medicinal value.(9)

Should cannabinoids be considered vitamins?

I believe that it’s simply a matter of time before cannabinoids, such as those derived from cannabis and the hemp plant, will be recognized as “n 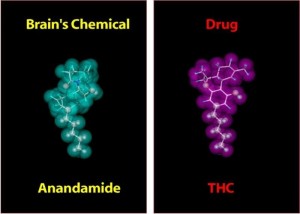 Biotin is a non-essential vitamin.  Just as the microbes in our bodies can produce vitamin B7, biotin, it’s possible for deficiencies to occur due to various disruptions in the balance of intestinal microbes. (10)    Therefore, there are times when it becomes necessary to supplement with biotin if we are to prevent the deleterious effects of a lack of this vitamin.

Likewise, it appears that in times of stress that our bodies require an increasing amount of cannabinoids in order to regulate the “endocannabinoid” system, which either directly or indirectly influences every cell in the body.(11)  It stands to reason that if the body can not produce sufficient levels of anadamide and 2-arachidonylglycerol (2-AG) to exert their influence within the endocannabinoid system, that an outside source would be required otherwise normal cell growth and function could not be achieved.   The best source for these exogenous sources of cannabinoids appears to be compounds found within marijuana and hemp, although other sources have been identified (12).

Clearly, if it is demonstrated that cannabinoids are necessary for the “normal growth and function”  of the the body, which the research appears to be showing, then by definition, cannabinoids should be classified as “non-essential” vitamins.

Taking vitamins shouldn’t be a crime.

While non-THC containing hemp (CBD) oil, which only influences CB2 receptors, is legally available over the counter in every state  of the US,  THC and its CB1 influencing  cannabis oil is still under heavy regulation, and unavailable (outside of the black market), throughout most of the US.   The significance of this is that it appears that stimulation of CB1 may be most critical in order to exert the anti-cancer benefits found within the endocannibinoid system, and it also appears that it is primarily the CB1 action that appears to be regulating the integrity of the gut lining, which is important when addressing ANY chronic illness, especially autoimmune disorders.  With 1:2 Americans predicted to be diagnosed with cancer, and 1:3 challenged by chronic illness at some point in their life, this should be of concern to every American.   In time, perhaps, cancer may be revealed to be a “vitamin deficiency”, if it’s demonstrated that adequate amounts of cannabinoids do indeed regulate control over our bodies ability to properly eliminate cancerous cells.  More research is needed in this area, however.

If you’re interested in helping to end the draconian drug laws related to the prohibition of marijuana, the “National Organization for Marijuana Reform Laws” is a good organization to support.   Clearly drugs laws do not prevent drug usage, their availability, or their potency.   Many people within law enforcement are now speaking out about this.   The current drug laws seem even more absurd when you consider that such laws appear to be creating vitamin deficiencies that may be fueling much of our current chronic disease epidemic.

Be sure to check out these short educational videos detailing the benefits of consuming raw cannabis, as a means to supplement cannabinoids.