Even if it is temporary, I am one to celebrate the federal government shutdown, but as a nature lover and a full time RVer, this affects me in some rather unwanted areas. With the government shutting down, only essential employees are allowed to remain at work, which resulted in the closing of thousands of federal campgrounds operated by the National Park Service, the U.S. Forest Service, the Army Corps of Engineers, and other federal agencies.

“The department of the interior has released the official shutdown plans. National parks and their campgrounds will not be managed by park rangers except for limited security, but will remain open. Campers will not be asked to leave, but no guarantees will be made for reserved sites, and reservation staff will not be on hand. Trash, electricity, restrooms, and other concessions will not be available. Visitors centers will be closed.

Quartzsite BLM LTVA camping areas will remain open during the shutdown, according to Quartzsite Town Manager Jim Ferguson. Park attendants will not be available, but security personnel will be working and trash will be handled. There’s still a question on the dump stations and fresh water.

Xanterra Parks & Resorts, which operates the lodges and concessions in Yellowstone, Grand Canyon, Crater Lake, Mt. Rushmore, Rocky Mountain, Zion, Glacier (closed during the winter season), The Oasis at Death Valley and Grand Canyon Railway, has said that its facilities will remain open.” -Department of the Interior

A Department of Interior representative confirmed to NPR that campgrounds will close due to the government shutdown, but said the Trump administration intends to keep access to National Parks and Monuments open. According to the NPS contingency plan, last updated September 2017, those planning to visit campgrounds will be notified in order to make other arrangements and depart the park. The plan does not specify how and when notifications will occur. Contrary to the Interior representative, the plan also emphasizes that park roads leading in and out of the parks will be closed and access will be denied “wherever possible.”

Bureau of Land Management Long Term Visitor Areas has also closed, leaving full time Rvers like me to make other arrangements. When the government shutdown for 16 days in 2013, some campgrounds were allowed to stay open, such as in Utah, where the state footed the bill for the federal employees to stay at work at the “big 5” national parks, but deals like that could take days to work out leaving campers to figure out a plan in the meantime. 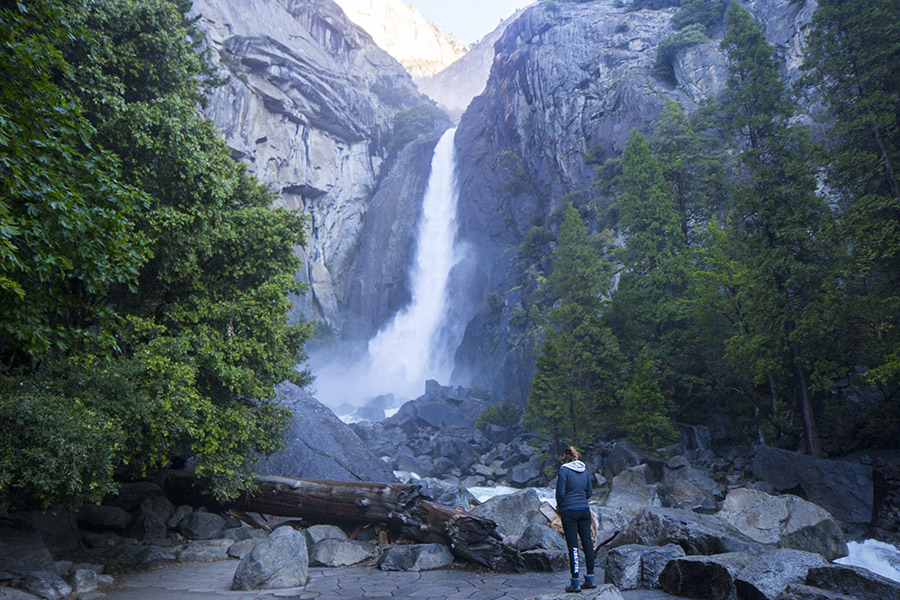 Me at Yosemite National Park

People don’t shutdown, the United States government does that. These federal lands are mismanaged, taken advantage of, and capitalized on. National lands that were first stolen from the natives, and that are now regulated by the government, who makes a profit by charging people to behold its beauty and travel across it.

When it comes to exchange, I would gladly clean up National Parks for time to stay and explore them and I know thousands of others who would as well. As someone who knows there is good in others, I have observed the massive respect and love so many people have for our planet. There are those who choose to dedicate their time to cleaning and taking care of the earth, making this something the government does not need to regulate, as there should be no ownership of land we all have a birth right to.

When government “owns” monuments of ancient lands they have the ability to sell it off to drilling, mining, oil and gas companies who are bent on destroying the land and creating environmental and health disasters for profit. The people would never allow this, but the state has rendered us useless and turns protesters into prisoners at alarming rates.

I don’t want companies and agencies that only care about gaining and controlling at the expense of our environment while under the guise of “preserving” our lands. We are the people that will not be bought out, so let’s take back what is ours and bypass these unnecessary inconveniences! Let us celebrate the government shutdown and strive to expand it!