Many follow my personal story and know that drug policy, particularly cannabis laws, has affected my life pretty severely and drastically. Cannabis decriminalization will change everything for me. The entire story of my life, beginning from childhood, is one that is intertwined with the war against marijuana. My upbringing and family life were shaped by the drug war. And now, illegal weed is the reason I cannot return to my home country.

This war on drugs resulted in me witnessing the murder of my loved one. And none of it would have happened without the prohibition of marijuana.

We can’t go back and change the past. But what we can do is make sure that in the future, no child or adult has to endure the suffering that I did. And maybe, just maybe, decriminalization means that I can finally go home.

My Story with Illegal Weed

It all started in the very early 90s. My parents met because my Mom sold weed, and my Dad smoked weed. On the day my Mom found out she was pregnant with me, both she and my dad were arrested for cannabis possession. No doubt, a bittersweet memory for them. My Dad took a case all the way to the State supreme court over a possession charge, on the grounds that he had been profiled because he looked like a hippy.

In my early childhood, I lived in weed grow houses and was involved in repeated drug raids. My mom spent most of my childhood running from the police for selling drugs and thus she was mostly absent from my life.

So it was with no surprise that when I turned 18, I began using cannabis habitually to help with anxiety. That began my start on a similar trajectory as my parents. And that began my issues with the law. I wanted to consume, and at some points produce cannabis for my health. It is pretty common knowledge now that marijuana has medicinal value. It’s the reason that the push for legalization has been successful.

Unfortunately, while the struggle to free the weed was ongoing, people like me suffered both the health and legal consequences of government policies prohibiting this plant. To this day the only real true trouble to come from my cannabis use has been imposed by the government. It makes one wonder if the government is really here to serve the interest of the people.

5 years ago I and my life partner were arrested for cannabis-related felonies. We were arrested by an undercover cop who had been a member at the drug policy club where I was president.

It wasn’t long after we were jailed that it became abundantly clear that they were intent on ruining our lives. We were peaceful people, with no history of violence and no victims. It was unfathomable that my freedom would be denied to me and all our plans for our future dashed. So with the experience of an unconventional childhood to draw from, I did what many would not have the courage to do. I thought outside of the box.

We set our sights on Mexico and despite having many tell us we would never make it, we did. With no money and the help of a best friend, we made it to Acapulco where we started our lives over as fugitives.

We lived in Mexico for almost 4 years blogging our adventures on Steemit and living our lives. Unfortunately, the drug war isn’t an isolated problem. In Mexico, illegal weed has resulted in powerful and violent cartels gaining power and influence. It’s reminiscent of the mafia that sprang out of alcohol prohibition in the US in the 1920s. The effects of prohibition are known. If you criminalize and threaten violence for an otherwise peaceful activity, criminals who are willing to engage in violence will come to prominence in that activity. And peaceful people will be caught in the middle of their violent competition.

That is what happened to us. We left the states to avoid being kidnapped and jailed by the US government. But in Mexico, we met with the other side of that violent coin.  The cartels. It’s a long emotional story. I get into the details in these interviews (Part One with Thaddeus Russell, Part 2 With Thaddeus Russell). It suffices here to say that I watched as my partner was murdered before my eyes. He was murdered by the cartel.

We had run afoul of an organization whose existence is the direct result of the criminalization of marijuana. As you think back on the moments when you have puff puff passed and gotten the giggles, or gotten lost in contemplation, or enjoyed the company of dear friends, the injustice of being killed over this plant may strike you a deeply and emotionally troubling indecency. It should. There is no justification for ruining a human being’s life over this plant.

People are STILL dying or having their lives ruined all over Mexico and in the US due to government drug policy. Many don’t have access to a medicine that has the ability to provide real medicinal relief. Many will continue to suffer as long as governments choose to regulate peaceful behavior with violence.

However, there is a light at the end of this tunnel. Public opinion is changing and so is policy. Organizations committed to seeing a flourishing human society, like M.A.P.S, are providing the research that proves the efficacy of plant medicines to do what pharmaceuticals have failed to do.

As a result of the steadfast campaign to free the weed, we may experience a huge victory with the passage of bill S.2227 otherwise called the M.O.R.E Act of 2019. You can read more about that bill here.

For me, the passage of this bill would be life-changing. Sure I’d have to wait for my state to fully get its shit together and legalize, but if the trend of decriminalization continues, it will mark the beginning of the end of running. If this cannabis decriminalization thing goes through, this is the end of nonviolent people having their lives ruined over an herb.

My story is more common than you might think. I’m just one person out of millions personally affected by this stupid prohibition of a naturally growing plant that has been used by humans since antiquity.

For more information about my story, check out these podcasts I did with Thaddeus Russell that tell all of this story basically.

For regular updates from me go to Highly Functional Growth.

There you can find everything from my social media links to how to donate to me or hire me!

Here are some other sources on this bill! 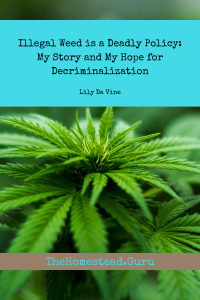 Check out my first post about this bill from last year!

And here’s the link for my latest post describing where this bill is at right now!!