I spent a few weeks on the carnivore diet experiment before I stumbled on this steak and broth recipe that I call Steak Soup. At first I was saving the leftover steak and bones from meals and adding water in the instant pot. It has since evolved into something wholesome and delicious.

Broth and stew like dishes are a comforting staple as far as the carnivore diet is concerned. I’ve found myself craving fat, especially recently. The end result of this stew hits the spot, with it’s glistening globs of fat that act like little fatty noodles.

Before this diet such a dish would have turned me away, a meat only blend of stew, fat and bone broth but now it’s a comforting blend that has a tendency to give me energy mid-day. 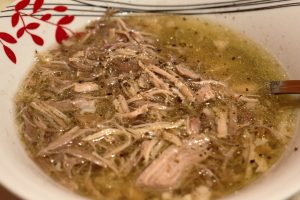 At this point I’ve made this with everything from cut up hunks of the leg bone to full steaks that were cooking up tough but the process and end result is nearly always the same.

It starts with the meat and bones in the instant pot. Three quarters of it with air spaces will be filling the instant pot chamber. I add only salt, pepper and water, occasionally bay leaves and in this case part of a giant clove of elephant variety garlic. If I’m really looking for extra flavor, sometimes a bit of balsamic vinegar (some claim its necessary in bone broth to soften the bones) and Worcestershire sauce have found their way into the pot.

In the instant pot for at least two hours, I did about two and a half for this batch but I’ve been known to go longer. Boiling this without the pressure cooker would take all day to reach the same consistency, you’re looking for the juicy fall apart texture. Being a carnivore and tearing into a steak is fun, but sometimes the jaw literally gets sore. This instead provides that soupy noodle like texture without having the carbs.

I’ve been making this regularly since starting the diet and certainly consider it one of my “must have” recipes as far as keeping things interesting on a way of eating as strict as the carnivore diet, which for most people is just meat, salt and water.

Salt, I like to use a blend because they do taste different and add different flavor profiles without adding carbs

Balsamic Vinegar (Optional According to some, others claim it’s necessary to pull all nutrients out of the bones)

1) Put everything above in the instant pot in no particular order, the spices and sauces to taste.

2) I add enough water to cover the meat which leaves me with moist meat and bone broth out of it.

3) Set the instant pot on the meat/stew option for at least two hours, up to four hours. Make sure the valve is set to close.

4) Instant release when the timer goes off.

5) Lots of stirring and sometimes a bit of boiling does the recipe well, generally due to lack of agitation in the pot when you open it everything will be in separate layers and it likely won’t look very good. I also generally use a fork to smash down larger fat pieces, once they’re in pea size pieces you don’t notice the texture when eating.

6) Salt and serve immediately. It does store, just refrigerate and reheat with a bit of water. Do not be surprised when it turns to meat jello in the fridge, that means you did it right.

Can also be frozen until later but I generally make enough for a few days at a time and eat a lot of it.

Hi Lily, I want to make your Instant Pot Rib Eye Bone Broth Carnivore Stew. I have a new pressure cooker (PC) that I haven’t used yet and have never used a PC before, mine is the Mealthy 9-in-1 version, not InstaPot brand. I’m confused on the cooking part of your recipe. You say to use the Meat/Stew option, which I have, but I don’t know if to use Low/Normal/High? Also, you say to cook for at least 2 hours up to 4, can you really go that long on this setting? My PC instructions say Low = 10 minutes… Read more »