There used to be a time when free people didn’t ask permission to grow food. I guess I can understand why legislation like this exists. The media creates a culture of fear, and until you leave the matrix, the only way of life you see of living, is that of one that asks permission from another human to be free.

The culture is changing, hence seeing laws about making growing food legal. If only it didn’t come from a place of fear. No one wants their right to grow food to be taken away! We must protect that human right! But through politics? I think not. Continuing the idea that we need permission from other humans to grow our own food, will only continue our enslavement to the very system we are asking permission from to begin with.

The only truly way to be free, is by not asking permission.

The Article below states that, “The San Antonio City Council approved amendments to the City’s Unified Development Code that will, among other things, help the city’s urban gardeners and farmers.” It also states that, “from 2016 onward, gardeners can grow food in most lots and sell produce right at their garden or farm.”

I am not sure how government permission helps free people. Apparently single resident lots require a special use permit per the legislation. This means your time and money will be required before permission can be given. Permission being the key word that encourages your continued enslavement. One part of the article even states zoning can be changed, but that requires a $700 fee. All zoning is, is words written on a piece of paper to control what individuals are allowed to do in a jurisdictional area. So what you are paying for, is government employees to change what is written on a piece of paper, and maybe enter something into their system.

There are many individuals who challenge these government services, by asking them to prove jurisdiction. The majority of the time, citations are released, due to there being no proof of government jurisdiction. 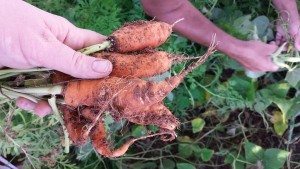 My take from the article is that permitting was only required for “urban farms” in residential zones where the farmer does not reside. Anyhow, I couldn’t agree more that it is absurd to wait for permission to do something that is our natural right. The people are very slow to awaken but I think there is a vague glimmer of an anarchism movement afoot. I hope so anyway.