The post in question was based on a poll taken from English Millennials in 2017.

This poll was conducted at the London Boat Show. It indicates the majority of young people known as millennials lack survival skills once perceived to be vital for human survival.

With the rise of technology, in lieu of skills like map reading which has fallen out of practice, many are entirely reliant on Google Maps.  Millennials are always more likely to pull out a phone than a map, let’s just face it.  Long gone are the days where we have to worry about predators in the wild, so survival skills have been often exchanged for different skills.  That’s worth acknowledging.

This post is going to be my personal take on this from the point of view of a millennial.

First, it’s worth defining the term. Millennial refers to people born between 1981 and 1996. This is the first generation to grow up with computers and video games within the home.

The criticism was to blame the older generations for the fact that millennials don’t know survival skills now.

It’s true the older generations haven’t done much teaching of traditional things to their millennial children. The thing is we, as millennials don’t get to use that as an excuse with the existence of the internet.

To explain my point further, I’ll share my own story. I grew up camping and climbing trees but when it came to the practical stuff I wasn’t involved.

I was all about making smores and playing. When it came to starting a fire or putting up tents, I left that to my dad. In some ways I had more skills than most my age, I had gone fishing even though I thought fish was disgusting. I knew how to put up a tent even though I didn’t like to do so anywhere but in my back yard.

When I turned 18 I realized pretty quickly I had no practical survival skills.

I couldn’t grow food. I could barely cook boxed meals. A big part of why I embarked on the intense life path that I did was a direct result of my realizing my inability to take care of myself.

Being 18 and coddled for years with participation trophies just to be thrust out into the world and told to survive. How, when we aren’t even taught how to do finances or a budget in schools anymore? Why is it that schools don’t teach these practical skills? That’s a question for another day.

But putting it simply I was scared and I was pissed. Although at the time I wasn’t totally aware it was something that affected the majority of millennials. I was told my whole life I was the best when I couldn’t even provide for myself in a survival situation.

And it was almost 3 years before I would actually live in a survival situation.

That was when I moved into a nearly abandoned house in the hood of Cleveland for 2 years to live “off-grid” but in the city.

It’s a long story about how I ended up there but the owner of the house was a friend of my partner at the time. He said we could live there rent-free and do whatever we wanted. So we decided to try living off-grid and doing the urban farm thing.

When I moved into that house it was -14 Fahrenheit outside in the coldest Ohio winter in 100 years. Absolutely brutal! The coldest I can remember. At the time I was a vegetarian who had never swung an ax yet all of a sudden I was responsible for keeping myself from freezing to death.  Needless to say, I couldn’t remain vegetarian as I barely had enough energy to prepare the wood to keep myself somewhat warm.

Before that, I thought I could start a fire no matter what.

2 hours in the freezing cold in a broken potbelly stove told me otherwise. I thought repeatedly about the fact that I knew none of my friends would be able to tolerate it. It really made me wonder how many of my peers could take care of themselves if they really had to.

Everything was so hard from preparing the wood to getting it to start burning, to keeping it burning.

Luckily I had tools and technology at my disposal. I wasn’t even in a situation where I had to do it without tools or even with limited tools.  Yet, even still I didn’t know how to use an ax or chainsaw so avoided both for WEEKS.  Using instead a sawzaw until I worked up the nerve to try the brand new chainsaw purchased with Bitcoin.

As a millennial, it took me weeks to swing that ax because my first ax was a 5 lb maul.

So think sledgehammer with an ax end. You needed strength to swing that and I just couldn’t do it at first. I remember cursing the thing thinking it was badly designed when in reality it was perfect for the hardwood I was using.  I remember wondering how hard it was to freeze to death in those temps constantly as I tried to reignite dead fires every morning.

So when I read this study, it resonated.

I didn’t develop skills until I forced myself into a survival situation. One thing I can tell you was that I was the only person I knew who checked out to do something like that. Everyone else stayed in their normal lives, at most having kids or starting gardens.

So do millennials lack survival skills?

Yeah. Likely because we don’t currently need them. However, I highly advise anyone lacking in these skills to start whatever interests you most know. At the very least you’ll get a new hobby. But it could be your source of survival during the times to come.

And with the recent coronavirus drama, I think many millennials are really facing how disadvantaged we have been.

Some millennials are now painfully aware that do we not have traditional knowledge.  This is compounded by the fact that millennials as a whole are disadvantaged. This is partially due to things like a lack of practical knowledge. In some ways it’s more affected by things like more college debt than modern millennials can handle when you consider income.  Millennials try and make a good life in what is, simply put, an extremely chaotic world that is pitted against the youth. All these recent events have put things into perspective so we have to asks ourselves:

“If we had to, could we survive with just our skills and our tools?”

If the answer to the question is no and that bothers you, start getting involved by learning new things!

Millennials, check out these 5 Guru Survival posts for ideas!

Build a Fire in the Rain

Rise of the Survival Garden

Survival Gardening in the Heat 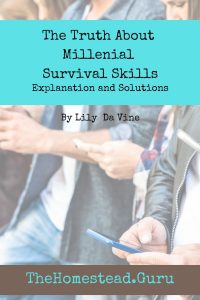