Kristen Dirksen makes some of the most amazing mini documentaries about alternative homes. She travels all over the world visiting people who live to create alternative homes. From Treehouses to Spaceship homes, she covers it all.

Recently she visited a Tree hotel just 40 miles from the Artic Circle. Here is a video of her time there. If you have a home worth seeing, I would definitely contact her. Sharing these alternatives with the world, allow us to open our minds. It allows us to see something different then what the code tells us to build. I look forward to seeing many more of her creations, as well as the creations she is promoting.

From the description on YouTube:
In the far north of Sweden in a very tiny town, Kent and Britta Lindvall – believing that if you build it they will come – built the world’s largest collection of designer treehouses. At their Treehotel you can sleep in the trees, just 40 miles south of the Arctic Circle, but sheltered in a bird’s nest, a disappearing cube, an elevated caravan, a gigantic dragonfly or a UFO.

It all began when the Lindvall’s were having trouble attracting people to their guesthouse (Britta’s Pensionat) in the town of Harads (population 500). They began renting out a treehouse built by a friend of theirs (for his documentary “The Tree Lovers”) and discovered it was surprisingly popular.

On a fishing trip in Russia with some of Sweden’s top architects, Kent raised the idea of building a treehouse hotel with rooms “you couldn’t find anywhere else in the world”. The architects loved the idea so Kent went home and started talking to a bank. He raised enough money to buy some forest next to the couple’s guest house that had been sold for logging.

Two years later, the Treehotel opened with the first four “treerooms”. It immediately attracted
press from all over the world and celebrity guests like Kate Moss who talked about it on social media.

The attraction here is the mix of isolation and architecture. Each treehouse has a different architect all charged with coming up with something completely new, and that doesn’t harm the trees it rests on.

On our road trip through Scandinavia we took a very long detour north (11 hours north of Stockholm by car) to stay in the UFO for a night. Designed by architect Bertil Harström of Inredningsgruppen, it hovers almost 20 feet above the ground, suspended by cables from the nearby trees. Like any flying saucer, the hatch on its underbelly opens to lower an electrically-operated ladder. Inside the 30-square-meter pod has a bathroom (with incinerating toilet, like all the other treerooms) and plenty of space for a family of 5. 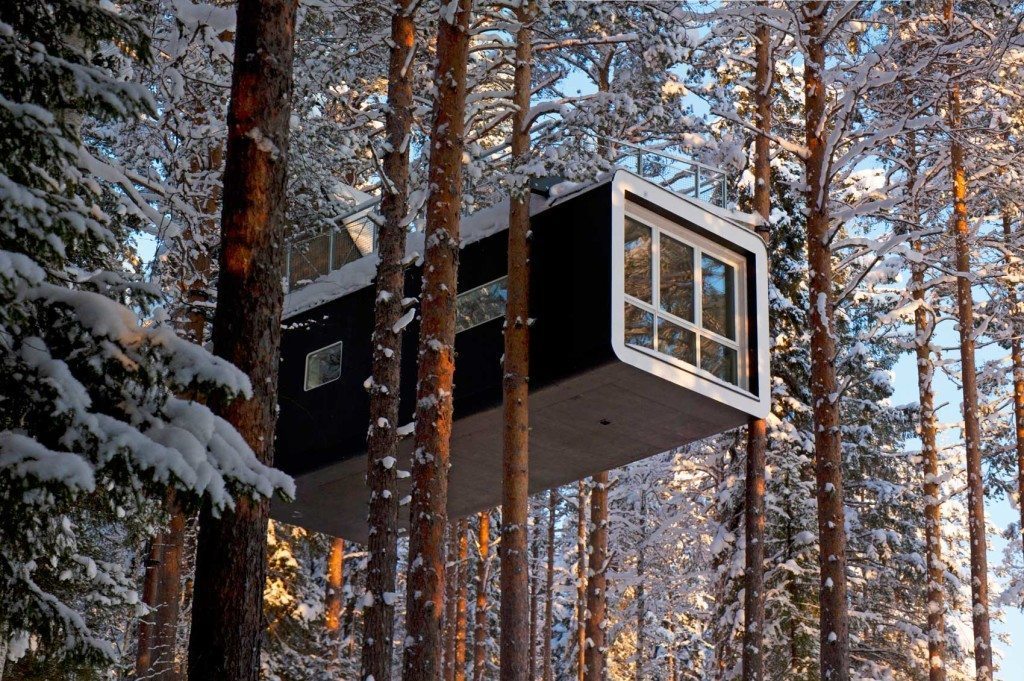