Vegan Cactus Leather is the Future

The Brains Behind the Vegan Cactus Leather

Their names are Adrian Lopez Velarde and Marte Cazarez.  The name of the company is cleverly Desserto. A shining example of Mexican ingenuity, these guys quit their jobs to focus on creating vegan leather.  It would be 2 years before they had a product they could be proud of. 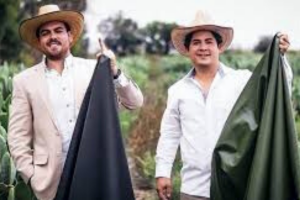 A vegan leather product has been in demand for a long time. Beyond plastic-based leathers, the market has not really been providing anything viable or sustainable. There have been attempts at pineapple leather and more. The guys at Desserto had the ingenious idea to experiment with what would turn out to be the perfect material: nopal cactus.

What Type of Cactus?

Nopal is the Mexican term for prickly pear cactus. It grows everywhere in Mexico without aid.  Mexicans have been making use of this plant for an incredibly long time, mostly as food. Using it for leather is an incredible use of resources. There aren’t many other vegan leather alternatives that grow as naturally and easily as this low maintenance plant. 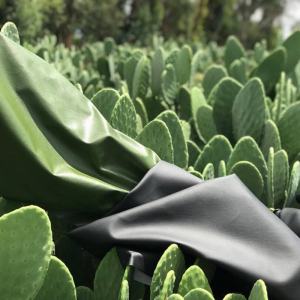 The Problem with Plastic Based Leather

Desserto has created a vegan leather that is organic without the need for harmful chemicals. PVC based plastic typically used for alternative leather products is known to be bad for the environment even if it can boast the label “vegan.”

Not Just for Vegans

Nopal Cactus leather is also a suitable leather replacement for those who aren’t vegan.  It is a lot better for the environment as well as human health than the current mainstream methods of producing regular animal leather.

The Problem of Modern Animal Leather

Unless we’re talking artisan leather, most animal leathers are processed using formaldehyde and other cancer-causing chemicals. This makes them unable to biodegrade.  There’s also worry about possible health implications of using these methods. Desserto’s cactus leather is partially degradable while still meeting weather use specifications.

Some Words from the Cactus Leather Guys…

“After two years of research and development, we managed to produce a suitable material that complies with the features and technical/mechanical specifications required by those industries that use animal or synthetic leather,” the cofounder told Fashion United in an Interview. 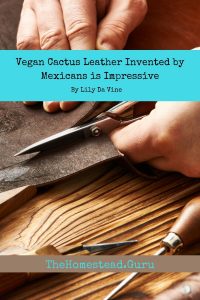 Not only can you wear it, but you can eat it too! Check out this prickly pear candy recipe.