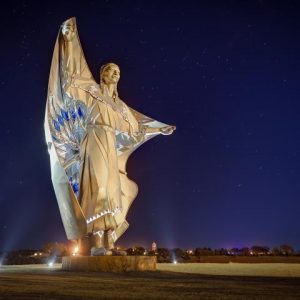 Did you know that in September of 2016, a gorgeous statue of a Native American woman went up in Chamberlain, South Dakota, to pay homage to the native peoples of that region–?

The statue was commissioned in 2014 by a couple who donated $1 million to the project. The artist who created Dignity, Dale Lamphere, says that “Dignity represents the courage, perseverance and wisdom of the Lakota and Dakota culture in South Dakota.”

The diamond-patterned quilt held by the woman has over 100 freely moving diamond shapes, which move with the wind and allow it to flow freely through the sculpture.

Everyone is sharing about how beautiful and amazing it is that the Dakota and Lakota peoples are finally being recognized and honored.

Maybe I’m just a bitter cynic, but I can’t help but see the smacking irony when we Americans hail a 50-foot, million-dollar statue as proof of progress, when the Standing Rock pipeline tragedy has not been solved to anyone’s satisfaction except the corporations who stand to profit from it.

Those native peoples whom we are “honoring” (and patting ourselves on the back for being such culturally-aware folks) with this statue are having a crude oil pipeline routed through their sacred lands just four hours away, in the same state.

Where exactly is the honor in that?

Standing Rock was a HUGE issue in everyone’s minds this past fall. We were all outraged, protesting, donating, even driving there to show our support….but what happened? Nothing, really.

The corporations won as usual, and we got distracted with the next manufactured crisis.

Now, I’m an artist myself, and I appreciate and value art highly. Dignity is undeniably gorgeous, a feat of artistic talent combined with engineering expertise. I’d love to see more art like this being valued and funded in America.

I’m also aware that I am a white-skinned daughter of a European immigrant to this country, so my opinion is just that–my own.

How does it make sense that donating $1 million to build a 50-foot statue honors the native Lakota and Dakota peoples MORE than simply preserving their sacred burial lands and potable water supply?

Is this really how we’re going to pretend that we’re “dignifying” America’s native peoples?

Personally, I think Dignity is a well-crafted smokescreen as well as a piece of incredible art, and that sort of tarnishes the glow–at least for me. What do you think??

That was a whole article about nothing. I sure hope the author NEVER puts her homeschooled offspring Into a gas powered vehicle muchless allows them to have any sort of plastic in their feel good household. As for me, I love the cheaper gas since Obama we as pushed out office. Now let’s get rid of Obama care and restructure our tax laws.