It wasn’t long after getting into brewing kombucha that I came across butterfly pea tea, which intrigued me just with it’s name. Its a little known herbal tea that’s actually got a bit of a magical quality to it; it changes color from a deep blue to a bright pink when you add any acids to it like lemon juice or kombucha culture depending on the concentration of the acid.

It’s gained a lot of popularity as a tea for brewing kombucha partially because it’s so fun but also because it works. Not all tea types work with brewing kombucha and some are finicky at best but especially with a blend of green tea butterfly pea tea generally goes off without a hitch, most people’s barrier to using it is lack of availability. It’s often blended with green tea (and lemon of course) because it’s basically flavorless despite it’s cool color. 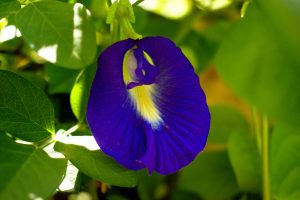 So last year, because I live in Acapulco, Mexico and cannot return to the states I asked a friend who was on her way here to smuggle some butterfly pea seeds for me. In the months after I found people in Acapulco are already growing this plant seemingly for it’s showy flowers, they just grow a more frilly variety than what I had brought to me. I know my neighbors here grow this but I have no idea if they know you can make a tea out of it. Someday soon I’ll try and talk to them about it, just have to practice my Spanish!

Butterfly pea tea is simple, consists of the flowers from Clitoria ternatea plant which also has edible pods when they’re young, like most pea varieties. They grow prolifically as a perennial when the climate permits and are extremely drought tolerant once they’re established so they’re pretty ideal for this climate. Like all other legumes it’s a nitrogen fixer but my personal experience tells me that once established this is one of the easiest and prettiest peas to grow out there.

I started my peas in damp paper towel in a baggy in a dark place, checking daily until the root started to pole through the swollen seed. They were then planted directly into soil to get established. Once their first true leaves are out they can be put into the ground. I avoid planting directly here in Acapulco because the ants are more likely to walk off with my seed before it sprouts, or the mold will get to it and kill it due to the wet season. Many people are of the belief that you shouldn’t transplant beans but I’ve always found so long as you don’t wait to long and are careful it’s generally fine and sometimes it’s still fine even if you’re late on the transplant.

More about Gardening from the Homestead Guru: Growing Tomatoes Made Easy: Use Rotting Tomato Slices For “Seed Starters”

Once transplanted so long as they get plenty of water (but not too much) and direct sunlight these will thrive. The majority of the seeds I brought with me from the United States do not grow here as well, not because they do not grow but because there are so many pests of mold and bugs both that make it so only the hardy or the heavily tended plants survive. I’ve had many people ask me about farming here, where there is no winter and I always tell them from a farmers standpoint winter is better, less bugs, more time off.

Before long, if you’ve planted these in your garden you’ll notice the flowers come early and they don’t stop. At first I was on top of the harvest but have since fallen behind as I try to address other things in life. Regardless these have taken off and have more blossoms than ever, begging to be picked and dried. 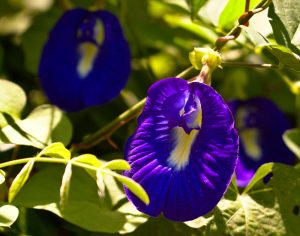 I dry these on a paper towel until dry to the touch and use them for tea then or put into a glass jar for storage. Fresh flowers can be used for tea but I find it needs to be boiled which likely removes any of the possible health benefits from the tea that are there.

Stay tuned, Next I’ll share how to make the tea and what the health benefits are!

Dandelion Jelly Recipe: How to Make Food From Weeds » HG

[…] Butterfly Pea Tea: How to Grow the Magic Color Changing Tea!(Opens in a new browser tab) […]