I’ve got a new love, guys: cacao nibs. I’ve had them in smoothies primarily where they add an interesting crunchy texture, but they’re also great plain. It’s one of the only ways I like the dark chocolate flavor profile and I think texture has something to do with that. They’re crunchy in a super satisfying way, like a coffee bean but better. They’re slightly sweet, slightly bitter, slightly nutty and very flavorful, a great addition to a healthy lifestyle.

Turns out these little things and cacao in general is a superfood, known as a brain food. This is mainly due to the fact that it gives us energy and has been linked to mental alertness. It’s Latin name is Theobroma cacao, which translates to “food of the gods” and I’m sure there are MANY chocoholics that would agree.

There’s very slight difference between cocoa and cocao in reality, and it’s rumored that the popularity of the spelling “cocoa” was just a mistake that stuck around. Regardless, cocao is just slightly roasted cocao beans from the tree. Cacao nibs are just broken, roasted cacao beans. These are the same beans used to make chocolate, just processed very minimally. At this point when people say cocoa, they’re referring to the highly processed dutch version or cocao with added sugars. This minimal processing makes cacao a much healthier product as the good stuff isn’t processed out like it is in dutch cocoa.

So why are they good for us?

More antioxidant in nature than tea, wine, blueberries or even goji berries.

9 grams of fiber in one ounce of nibs

Absorbs free radicals that cause damage to the body

It turns out that chocolate addiction is actually most likely linked to magnesium deficiency, which is apparently very common in todays world. Magnesium deficiency has been linked to all sorts of things like: ADHD, schizophrenia, bipolar, panic attacks and anxiety.

Cacao contains two compounds that are responsible for the claims of energy and happiness from eating chocolate. One’s called theobromine and this is actually the compound in chocolate that is considered harmful to dogs. It is similar to caffeine in that it’s known to give lots of energy. The reason it’s harmful to dogs is that it causes the heartbeat to quicken, sometimes too much causing heart attack. This is honestly dependent on breed and size though, as Rebel dog has eaten a lot of chocolate with very little side effect, other than zippiness. I’m not saying I gave him the chocolate, but like any good wolf dog he got himself some. 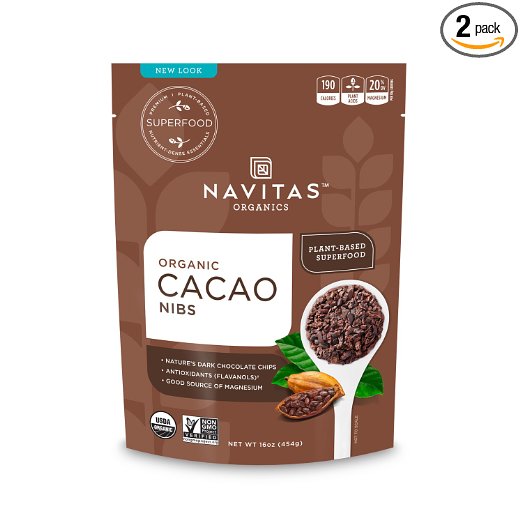 Get cacao nibs here on Amazon!

The other compound is lovingly referred to as “the bliss molecule”. It’s called Anandamide and it’s apparently naturally molecularly similar to THC, the active molecule in Cannabis. So it’s no wonder I love these things, they really hit the spot for me!

One thing I found interesting was that while they contain a lot of calcium, cacao nibs are not considered a good calcium source because they contain oxalic acid which inhibits calcium intake. This is also found in foods like spinach. So while you do get some calcium from cacao nibs, you don’t get a lot. But don’t worry, it’s not like eating chocolate makes it so you can’t absorb calcium, it just makes it so you don’t absorb as much of the calcium within the cacao.

All in all it’s a fascinating and tasty new addition to my kitchen. I know they’re readily available in the states but I’ve only found them at Verde Pistache here in Acapulco. They have their own limited supply as the supplier never seems to have them, so this is a special addition to my kitchen for this reason.

If you come across cacao or cacao nibs, give it a try in your food and smoothies. They’re great in yogurt with granola and they add an interesting texture in smoothies too. Avoid dutch pressed cocoa as most of the good stuff has been processed out, so you’re not getting any of the useful stuff listed in this article.

Just come across you and loving your articles. I have cacao in my nutribullet blends