As the economy gets worse people look for new (or old) ways to preserve the things they care about most. Something often not thought about as far as canning is concerned for the average person is canning bacon. Most home canners stay away from it leaving it up to the people known as rebel canners, those who will can basically anything that’s edible just to see if it’s done.

Now you can buy canned bacon, but from my understanding it’s pretty expensive for what it is especially when you consider how easy it is to make at home. People have been canning bacon and other cured meats like corned beef for a long time and it’s only just now gaining popularity again as people start re-learning the art of canning.

If you ask the US government and FDA, the safety of these canned meats are questionable at best not because they’ve necessarily proven to be bad, but because there’s a huge lack of official research on the subject to determine that either way. What I do know is that plenty of people do it at home and for some it’s a staple in their prepping pantry.

More from the Homestead Guru: UN Report Says Small-Scale Organic Farming Only Way To Feed The World(Opens in a new browser tab)

Start by cutting the paper to be at least as wide as the strips of bacon. Lay them out side by side on the sheet of paper until it’s covered. Experiment with length of paper/amount of bacon depending on what size jar you use. Cut another piece the same size and lay it on top. Fold the whole thing strips and all in half, then roll up. Insert that into the jar, cutting off any excess if it’s too much. Seal with a lid and band and put in the pressure cooker for 90 minutes. Allow to cool and store.

More from the Homestead Guru: Naturally Cure Earaches With “The Onion Trick”(Opens in a new browser tab)

When you use it just open the can, pull out the paper and fry as usual. The bacon will cook quicker because it’s already precooked in the jars. This can last several years, most sources say 5-10 if needed although it’s bacon…is it really going to last THAT long?

So if you’ve been wanting to give canned bacon a try, screw the store-bought version try making your own. Because it’s cured and salted it makes it an incredibly easy product to can. And if there are people out there canning cake, why not bacon??

What is the craziest thing you’ve canned? 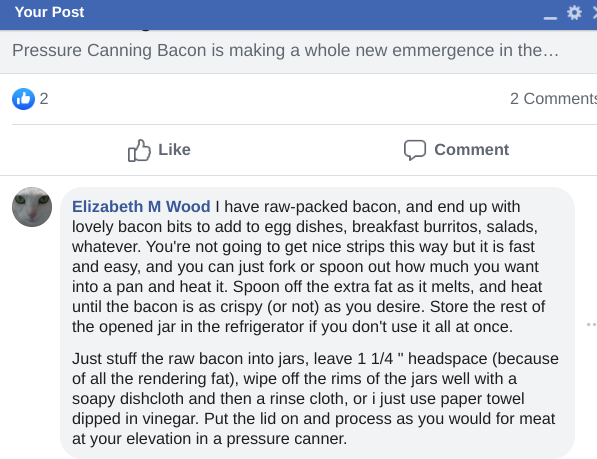 […] More from the Homestead Guru: Rebel Canning: How to Make Your Own Tactical Bacon(Opens in a new browser tab) […]

How-to Thrive During the Recession by Canning Butter – Fikiss Permaculture

[…] Guru, we’re all about artistic canning concepts. You may bear in mind our recipe/how-to for pressure canning bacon for survival situations. Anybody who adopted that recipe is probably going pleased to have that ability in these present […]