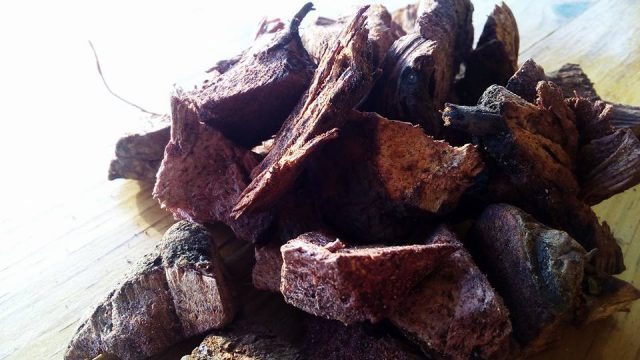 I love a good ethobotanical adventure and Mexico is full of them. Today, while near the central market, we stumbled (nearly literally) on a pile of mysterious red vine with a smiling vender.

He was also selling jars like the one photoed above, called Pomada de Peyote. You heard that right, we’re talking legitimate peyote, in extremely small doses from what my research tells me.

My research also told me it’s used for joint pain and inflammation, making it a great purchase for me. It’s literally a combination of peyote, arnica montana and marjiuana. You read that right, they put weed in it. I love this place.

But this root, the root was different. He had a little sheet he passed out with it. It lists all sorts of things, like that it helps with: stomach issues, intestinal issues, prostate issues, feet pain and swelling, gastritis, inflammation of the intestines.

He had a curious bottle of purified water that was stained red from the root, as there were a few pieces of it in the bottom. The bottom of that little paper tells me to steep two pieces in two liters of water to drink.

So I had to look it up, and I had a bit of difficulty getting clear information.

This list goes on much longer. One woman writes about how she used it along with Mayan medicinal routine to get rid of ovarian cysts.

If you include the research regarding the whole smilacaceae family, which includes popular known sarsaparilla used in the drink pretty similar to root beer, this is a hugely medicinal plant, a miracle vine if you will.

The plant gets its name cocolmeca from two words, which translates to mean vine for caregiving or sickness. Considering it’s wide range of health effects, I think it’s fitting.

I looked for a long while for research in English on it an honestly couldn’t find much on the vine I encountered, as they are different all around the world.

All the sources I found were in Spanish so one day when I have the time I’ll go through the effort of translating those pages to find out what they hold. I expect it won’t be much different from what I found in English, however.

As with many things in life, the best way is to try it. The vendor seemed reputable, as we were not his only customer. It seemed like certain people were going there specifically, not just passersby as we were.

Considering I’m not sure if I’ve ever felt what truly healthy feels like, having been raised malnourished on processed food when we had food to eat, I’m interested to see the effects. Considering this vine deals much with toxicity of blood, it will be interesting to learn how many of my symptoms are explained by toxicity of the blood.

One source I read had this quote, which I appreciate in it’s description of how it works. This is just about the only thing I found describing how it works,

“..[It Has] unique capacity to rebuild quality of blood when weakened by toxicity, stagnation or other imbalances”.

The Mexican people seem to hold a high respect for this vine, and when I found that it takes 40 years for the root rhizomes to become hard enough to harvest, I grew a lot more respect for it as well.

Again, I’m in awe that these people even discovered that these plants had these effects, in the manner in which they are consumed.

I think there’s a lot of value in indigenous medicine, don’t you?

The Mexican people are so much more connected to nature than the people in the United States. Here, herbal medicine is more common for many, especially those with low income, than pharmaceutical healing.

This is a culture that still understands the value in plant medicine, and it’s for this reason (among many, many others) that I have found a home here, despite being from so far away.

Editor’s Note: If you want to try some, I did find it on Amazon: