This article originally posted on The Grow Network is part of a series on weed gardens and identifying and using the plants you’ll often find there. For other articles in the series, please click here. 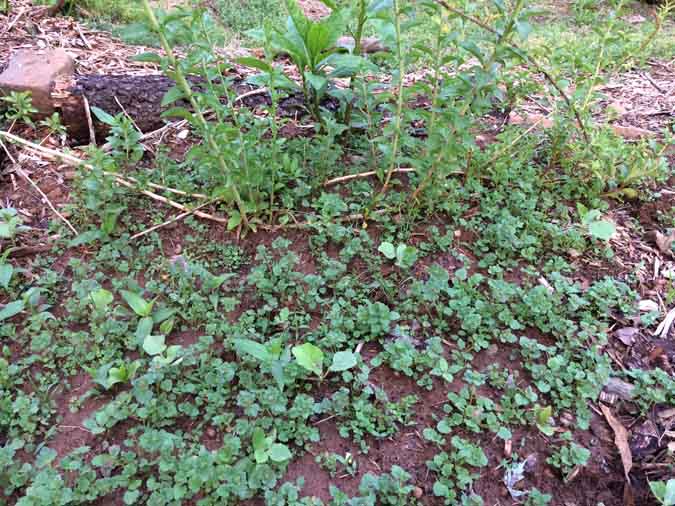 As you can see, the weed garden is really starting to come to life. I’ve got henbit, sedges, dayflowers, wood sorrel, pokeweed, and a few other visitors. But one weed I would gladly welcome has yet to show up. Dandelions! 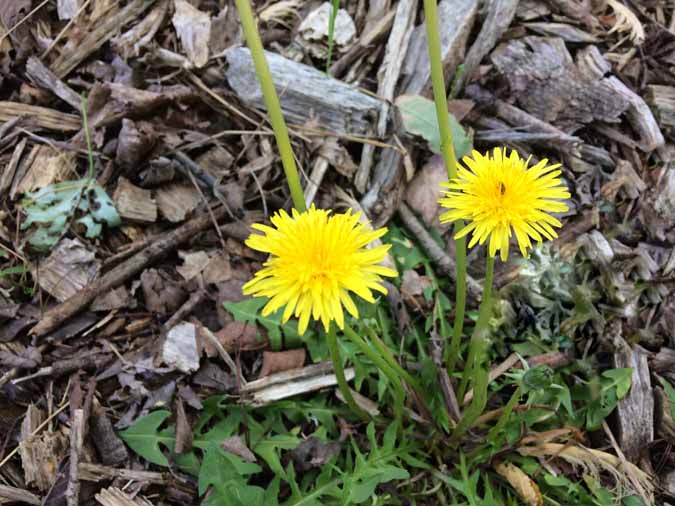 Dandelions are pretty much the unofficial mascots for foraging and herbal medicine. They can be found on every continent (except Antarctica) and have tremendous value as food and medicine. They invade lawns, fields, and waste spaces despite every effort to control, contain, and kill them.

Dandelions are survivors, and they pass on a little of that to us when we consume them.

While dandelions do have a few look-alikes, none of them are toxic. Among the common fakers, you’ll find the cat’s ear, chicory, shepherd’s purse, and hawksbeard. Here’s your guide to telling the real thing from the fakers.

Dandelions are perennials1) that grow in a basal rosette.2) You’ll never find leaves growing from the stem. Leaves are anywhere from 2 inches to over a foot (5 to 40 centimeters) long and have jagged teeth. 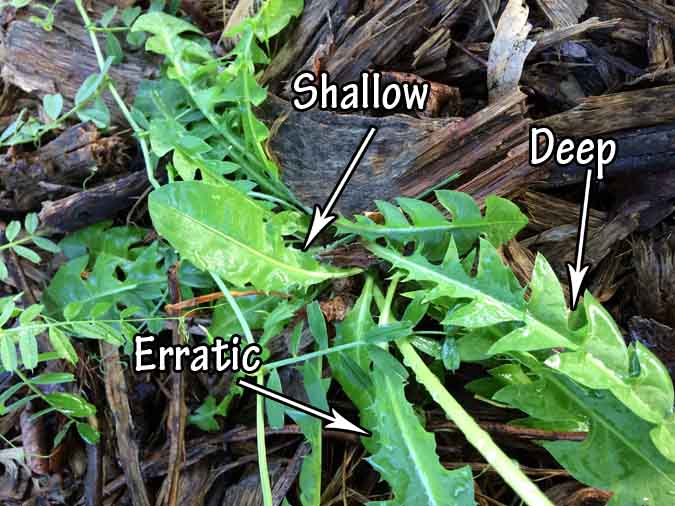 The jagged pattern of the leaves can vary quite a bit. On some plants, the indentations will go nearly to the midline of the leaf, while others will have fairly shallow teeth. The tips of the teeth tend to point backward, toward the center of the plant. Leaves are virtually hairless at all stages of growth. 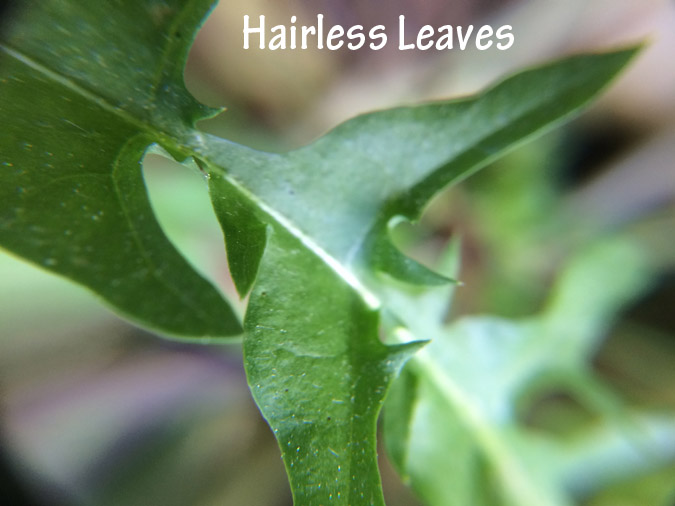 By the way, the name “dandelion” is said to come from “dent de lion” or “teeth of the lion.” And depending on who you ask, this either refers to the jagged leaves or the flower petals.

The scientific name, Taraxacum officinale, could be translated as “the official cure for every disorder.” 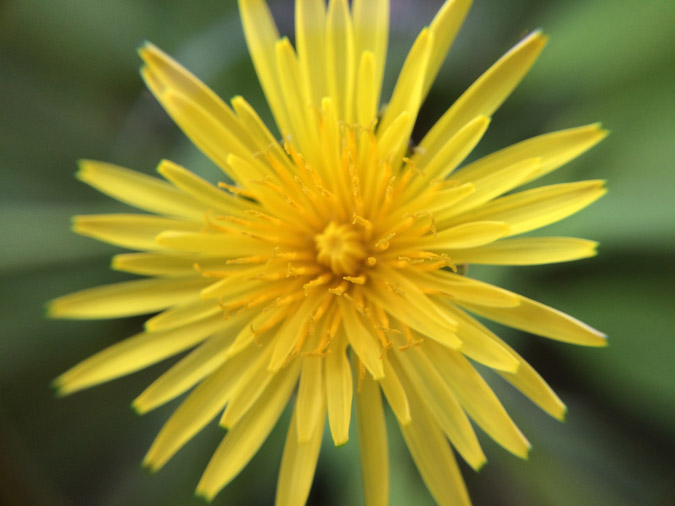 The yellow blooms are composite flowers. That is, they look like one flower, but are technically a cluster of tiny flowers. The ends of the petals tend to be flat, rather than tapering to a point, and they overlap all the way to the center of the flower. Blooming happens mostly in spring, and again in fall, with sporadic blooming at any time. 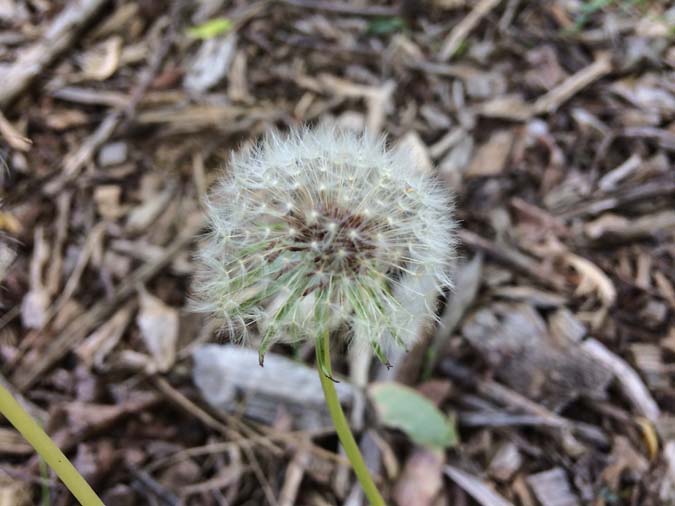 These flowers turn into the puffballs that kids love to blow on to make wishes. A single dandelion plant may produce many stems and flowers, but each stem will have only a single flower. The stems are hollow and can range in length from 2 to 18 inches (5 to 45 centimeters).

All parts of the plant contain a white, milky sap. This would normally be a warning sign, but dandelions are an exception to the rule.

Read More: “How to Not Die While Wildcrafting: 15 Rules for Foraging Safely”

There are even some rather useful applications for this sap, which we’ll get into below. Be aware that dandelion sap has occasionally been reported to cause contact dermatitis in some individuals.

Dandelions can be found throughout the U.S., Canada, and most of the rest of the world, especially around people. This is another plant that loves us and wants to be near us. You can find them in lawns, fields, pastures, waste spaces, and disturbed ground. They seem to survive everything from drought to over-picking, to digging, to mowing, to herbicides. But why would you want to get rid of these happy little guys? They’re beautiful, and they’re trying so hard to help us.

If you do an Internet search for dandelion recipes, you’ll find page after page of preparations for this versatile vegetation. Recipes abound!

I, myself, have only scratched the surface of dandelion delicacies. There are just so many!

And why shouldn’t there be? Every part of the plant is edible, raw or cooked. And not only are dandelions plentiful, but they’re also a very nearly perfect food. Dandelions are rich in potassium; magnesium; manganese; phosphorus; sodium; copper; choline; calcium; iron; lecithin; biotin; inositol; chlorophyll; fiber; and vitamins A, B1, B2, B5, B6, B9, B12, C, D, and E.3),4),5),6),7),8)

That’s quite a mouthful. Literally.

They have more vitamin A than any other green plant—six times more than carrots—and a single cup of fresh greens will meet your daily requirement of beta-carotene, iron, calcium, and potassium!9)

That tap root really reaches down to bring up the good stuff. You can see why I call them the king of weeds.

Furthermore, when eaten as a whole (roots to flowers/seeds), the dandelion forms a complete protein, with all 9 essential amino acids.10) That’s a pretty good trick for a plant.

Dandelion also seems to help with the absorption and balance of minerals.11)

But let’s address the elephant in the room. Dandelions are bitter. Very bitter. Involuntarily-spit-them-out-and-go-wash-your-mouth-out-with-ice-cream bitter.

Perhaps I exaggerate. But how is one to get past the bitterness to access those amazing nutrients? I’ve got you covered.

First, you should select the best dandelions. The best-tasting leaves have had the easiest life. Don’t pick any sunbaked, twice-stepped-on leaves. Harvest from a plant in a shady, well-watered location. Harvest younger greens, earlier in the year. Leaves toward the center of the rosette also tend to be less bitter.

Next, choose the right preparation. It’s the rare individual who enjoys eating a handful of dandelion greens raw. It’s a lot easier to moderate their taste by chopping them up and mixing them with other greens. They also pair well with savory dishes.

Of all the cooking methods, boiling does the best job of reducing bitterness. Drop the leaves into boiling water for 5 to 10 minutes. If you’ve picked a good plant, it shouldn’t take much more than this. If not, you can always boil them longer. Use plenty of water so the bitterness has someplace to go.

Eating the Roots: Stir-fried, Pickled, and as a Coffee Substitute

The root can be eaten raw but tastes better when cooked. Try them sliced and stir-fried with other veggies. Cooking breaks down the root’s inulin into fructose, bringing out a much sweeter taste. They’re also a fine addition to soups and stews, and—although I’ve never tried it—they are reportedly quite tasty when pickled. 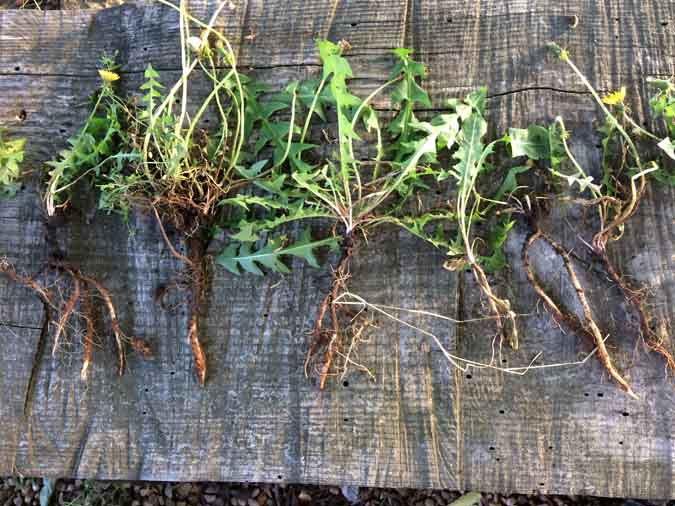 The root is typically harvested from late fall to early spring. Second-year roots are preferred, but good luck on guessing how old a dandelion is by looking at it. If it’s too old and woody to eat, you can still use it to make a caffeine-free coffee substitute. Slice up the root and slow-roast it in your oven until it turns dark brown and becomes brittle. This should take about 30 minutes at 350°F (175°C). Let it cool, and then grind it up to use like coffee grounds. I’m usually not a fan of coffee substitutes, but this is one I really enjoy.

If you’d like to take your dandelion coffee to the next level (and who wouldn’t?), you can turn it into a dandelion mocha. This recipe comes from Rosemary Gladstar, and it is delightful.

Use 1 tbsp each of the dandelion coffee grounds and cacao nibs. Simmer in 3 cups of water for 30 minutes. Then strain and add ½ cup milk (or milk substitute), ½ tsp. cinnamon, ½ tsp. vanilla extract, 1 tbsp. honey (or another sweetener), and a dash of ground nutmeg or cloves.

It’s excellent. I highly recommend you try it.

The flowers make a colorful addition to salads, soups, ice creams, or just about anything else. Two of my favorite ways to eat them are sautéed in butter and as an ingredient in dandelion lemonade.

The less green you have from the base of the blossoms, the less bitter they will taste. Here’s a brief clip demonstrating a super-easy way to separate the petals from the bitter greens:

The last way to get past the bitterness is simply to build up an appreciation for it. Sure, it’s not the most popular option, but you really can develop a taste for food by consistently consuming small portions of it. Gradually, your aversion turns into tolerance. And then tolerance can even become a craving. It really works. Try it!

Dandelion’s medicinal effects are not limited to its impressive nutritional profile. It sports a bevy of benefits. Let’s dive in!

As a Digestive Aid

Dandelion stimulates appetite, aids the liver in its detoxification duties, helps to regulate the release of pancreatic hormone, is stimulating to the spleen, supports correct bile duct function, and even helps to repair the gut wall.14),15),16) It may even help to resist the progression of cirrhosis of the liver.17)

Dandelion is a remarkable plant!

In one experiment, participants with non-specific colitis were given dandelion along with calendula, lemon balm, and St. John’s wort. Complete relief from spontaneous and palpable pains was reported by 96% of participants, and stools were normalized in those with diarrhea symptoms.18)

As a Spring Tonic and Diuretic

Dandelion is also well-known as a spring tonic. It helps to flush and tone the body after enduring the rigors of winter.

The entire plant is diuretic, flushing excess water from the body and generally giving us a good cleansing. The leaf is more powerful than the root and is comparable to the drug furosemide in terms of strength.19) Don’t take it right before bed or you’ll be up all night. Trust me. I know.

Dandelion’s diuretic properties help to relieve fluid retention.20) It is also used to dissolve calcium stones and to prevent new ones from forming, and can be used safely over long periods.21),22)

With conventional pharmaceuticals, as the body flushes out water, it’s also flushing out our supply of potassium. This can be rough on your heart and cause problems for anyone with a heart condition.24) Dandelion, on the other hand, is so rich in potassium that even while it flushes out the body, it still provides a net gain in potassium.25) This makes it an ideal diuretic herb for people with heart issues.26)

The natural latex in its sap is helpful in getting rid of warts.27) However, this is not a quick process. The sap must be applied several times a day for 2 to 3 weeks. Direct application of the sap can also help with moles, pimples, canker sores, and other skin blemishes.28), 29)

To Fight Cancer and Harmful Bacteria

Dandelion may have anti-tumor/anti-cancer properties, though it is not clear whether this would be from direct action or indirectly through its ability to cleanse and support normal body function.30),31) Dandelion also appears to have selective antimicrobial properties, supporting healthy gut bacteria while discouraging unhealthy ones.32),33),34) It even helps prevent plaque buildup on teeth.35)

Dandelion is also cooling and drying and can be used as a fever reducer.36) It’s a mild laxative and has an alkalizing effect on the body.37),38),39) Dandelion may also help some people with allergies and food intolerances.40)

You can use dandelion via any of the normal methods: fresh, dried, tincture, decoction, infusion, etc. The dried leaves make an excellent addition to green powders.

Outside of some very specific circumstances, dandelion is widely considered to be safe. Recommendations vary from herbalist to herbalist as to how much you should take.

I will present some amounts that I think are reasonable, but you should view them as suggestions, rather than rules. Other quantities/frequencies could be equally valid, depending on your situation.

Pour boiling water over ½ tsp of dried leaf and allow it to steep for 10–15 minutes. Drink this 3 times a day.

Dandelions are so impressively versatile that I could never fit everything into a single article.

For example, did you know that the sap can be used as glue, or that the stem can be fashioned into a working flute?

What else did I leave out? What’s your favorite recipe or medicinal use? Do you have any dandelion stories (or horror stories about the bitter flavor)? Are dandelions really the king of weeds, or should that title belong to a different plant? Let me know in the comments!