I started my adventures homesteading nearly 8 years ago but in the city. We chose to do it in the city (despite the fact that living off grid was in fact illegal there) because we were close to things like Walmart and Home Depot, making the whole transition and learning process less stressful.

I actually started my homesteading adventures in the middle of winter in the hood in a nearly abandoned (owned by a friend) house. I had a wood stove but the house was so leaky it would snow indoors. It just happened to be one of the coldest winters certainly in my lifetime as well. 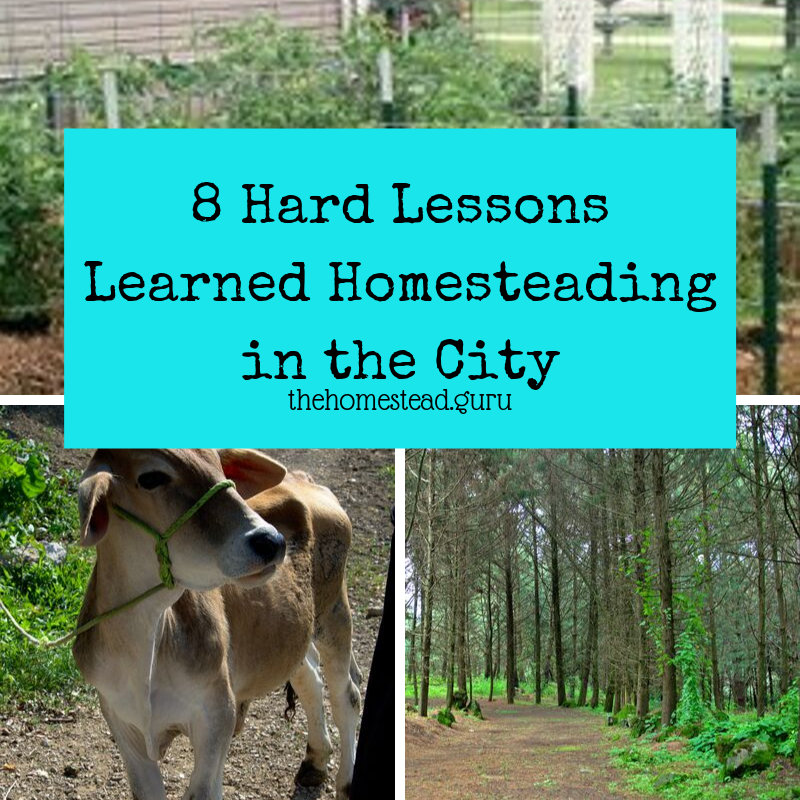 I had never been responsible for myself as far as providing basic needs like my heat during the winter. I learned so much in that first year and a half, mostly that people just don’t have a clue when it comes to what it really takes to survive especially in cold climates.

I’ve continued to homestead as I’ve traveled, switching climates from the north eastern united states to southern Mexico. All of my farming has been done in the city, oddly enough. Here’s the 8 Hard lessons Learned from my urban off grid adventures.

Homesteading in the City

Providing your own heat takes a LOT of work.

From building stoves to gathering and preparing firewood I was floored at how much of my energy was spent just keeping myself warm. Granted I was dealing with -20 degree temps most of the time but the fact that I was dealing with a very leaky house also didn’t help. And prepping firewood did not come naturally to me, someone who had no upper body strength. I didn’t know how to swing an ax and I was afraid of the chainsaw at first but by the end of it I could handle both like a pro. I actually miss chopping firewood.

Cooking on a woodstove is HARD.

Especially in those cold of temperatures. There’s 2 temps as far as I’m concerned with a traditional pot belly wood stove like the one I had. Hot as hell and low. It took me months to master it and by the time I did it was too hot to use the indoor stove. I then adjusted to a rocket stove built out of bricks and while it was awesome, I found myself quickly running out of twigs in that urban neighborhood.

Off Grid Electricity can be volatile.

About 5 years ago I heard a loud bang as John went outside to switch power from the generator we used during the day to solar power for the night. He plugged things in, turned on the inverter and there was a bang. Turns out above his head one of the batteries had exploded likely somewhat due to the frigid attempts scaring both of us and sending battery acid everywhere. We both lost good clothes in the cleaning up process. We were using marine batteries at the time and only had about 300 watts of solar panels.

More from the Homestead Guru: Going Tiny: Emotional Brain Surgery, The 5 Steps To Downsizing(Opens in a new browser tab)

Growing Food is Hard if You Don’t Already Know How

One thing that is common for many farmers is dealing with the roadblocks put up by government on what they’re allowed to do with their own property. Farming wise to be allowed to do legally what we did in the city illegally, which was just grow a lot of veggies, we needed to submit garden plans that showed the location of everything from tools to individual plants. During my first year homesteading I read the book a Rebel Farmer by Sepp Holzer, which is basically all about his loopholes for dealing with the state where he is.

Nothing is more rewarding than homesteading.

There’s something really satisfying about being self reliant. We provided our own water by rain collection, wood, food and even cannabis during most of our homesteading adventures. Beyond that I took the time to learn skills like crochet and glassblowing. My cooking vastly improved to the point where I can basically cook anything well. Now I’m 26 years old and left with a long list of skills that has given me a full life rich with experiences, like mountain top chicken farming in Acapulco.

More from the Homestead Guru: How Decentralization (income, geography, food source, etc..) Can Create Stability in Your Life(Opens in a new browser tab)

It’s not for the weak.

This one needs said because I learned it the hard way. In pretty much every way when I started homesteading I was weak and painfully aware of it. I felt vulnerable because I couldn’t provide my own needs and in a country with a collapsing economy and social structure, I was vulnerable. So I dove right in and while there were a few times I thought I was going to freeze to death I managed to make it through. I’m now an extremely strong person as a result, but I can’t say I felt strong before recently. It’s a slow, painful process if you’re coming at this with no experience.

The thing with homesteads is we get these visions in our head about what we want then we basically want it all to happen immediately. When we embark we realize these things often take a lot of work and time from permaculture herb spirals to chicken coops. Nothing good happens overnight and learning to homestead is a process of learning to be patient.

More from the Homestead Guru: Growing Tomatoes Made Easy: Use Rotting Tomato Slices For “Seed Starters”(Opens in a new browser tab)

As you can tell I had a bit of an unconventional entrance into farming and homesteading adventures. I went in basically blindly and felt my way around for years until I caught my bearings. Now I am traveling around looking for the perfect part of Mexico to eventually buy land and develop how I want, likely with cows, the next project I know very little about. Some things don’t change.