Who is Jordan Peterson?

There’s been a lot of talk about Jordan Peterson in the last several years but something I don’t yet see enough people talking about is the fact that he saves lives, so far at least mine but I am sure of many others. See if it wasn’t for an interview with Jordan Peterson and Joe Rogan, I would have never tried the diet which has cured many of my health issues.

What is the carnivore diet?

This diet is known as the carnivore diet but is also referred to as the zero carb lifestyle among other things. The basis of it is to only consume meat, salt, and water. Most people consume a wide array of meats and animal products in general (including milk) but those of us with a more sensitive system become even more restricted, sometimes to only beef. I did only beef for about 5 months.

Why the carnivore diet?

Many people do this diet to lose weight as it is a ketogenic diet but just as many people are like me and do it for increased quality of life.

I first heard the podcast with Rogan and Peterson about the carnivore diet at the beginning of July 2018. I had been suffering from a long list of symptoms I’ll share below and I was admittedly scared about my situation. It felt like I was falling apart like I was dying at 25 and I had no explanation for why.

digestive troubles (of all kinds, in weird cycles never really returning to normal)

tremors and shakes that seemed like Early Onset Parkinson’s

constant fatigue combined with insomnia at night from sickness

night sweats bad enough to make me have to change my clothes, sometimes sheets too

growing sensitivity to food in general

I’m sure there are things I’m forgetting but living like that on a constant basis as a 25-year-old was awful. I was suicidal mostly because of the way I felt and the fact that I had no explanation for it. Then my partner put on a podcast with Rogan and Peterson about the changes that happened with Mikhalia Peterson with her all-beef diet.

Giving Up Everything I Loved in Food

By the end of it, my partner was nearly begging me to try it and I’ll admit I didn’t want to. As a chef and baker, I loved the food that I ate even if it made me feel awful. It didn’t help that I was admittedly awful at cooking meat.

I couldn’t even say I liked eating meat when I tried this way of eating even though I wasn’t vegetarian anymore (tried it in college). Remembering my suicidal thoughts and fear of what was happening with my body, I did.

The Shift to the Carnivore Diet

We embarked on the diet together not long after that interview. We also watched the interview with Joe Rogan and Shawn Baker, a well-known physician who has been pushing the carnivore diet as a healthy solution. Shawn Baker also helped convince me to do it, showing there was more than just one guy’s experience behind this. And the more I thought about it, the more it made sense when I considered human history.

The Keto Flu and Carb Cravings from Hell

There was a hell of an adjustment period. First, the keto flu then dealing with the emotional stuff, mostly realizing how addicted I was to the way I ate before. It was less about actually needing those things but I found when I was upset I’d turn to the things I used to eat. I also found I was upset about the fact that I had to quit all of that to survive, which didn’t help.

Three weeks in and it suddenly seemed worth it. I’d lost all bloating, my digestion was regulated and I was sleeping at night without sweats. My acne was clearing for the first time ever. I had more energy than ever despite the fact I was technically sleeping fewer hours. And the majority of my symptoms all but disappeared, the only real remaining issue being skin and that improved (and still does. It was AWFUL) by the day.

I wish I could say this has been an easy process but it hasn’t. It’s been one with many ups and downs as I’ve tried reintroducing foods here and there never with success. I’ve restricted myself even more down to beef, salt, and water and find I feel the best that way. What kept me devoted was the fact that it was the only thing to help any of my symptoms and it was helping everything. The only time I felt the way I used to is when I would cheat on the diet, and often for weeks afterward.

For about 5 months straight I restricted myself to only beef and eventually I got tired of it.  The hardest thing about the carnivore diet as a chef is sticking to the monotony of meat.  So I first tried gummy candy, without much issue. Then fruit, then corn tortillas.  There’s still a lot I can’t eat, but I’m able to digest a lot more than I could before now.  Some examples of stuff I still can’t eat are cabbage, wheat, passion fruit, eggs, canola oil, chile, chocolate, oats, and more.

If there’s one thing I’ve learned it’s that I should have committed more from the beginning because there really is something to the diet. I kept fooling myself into believing that I needed more to be happy, only to remind myself just how bad I used to feel over things like fruit or gummy candy.

Do I recommend the carnivore diet for everyone?

I’m sure people would expect me to say I recommend everyone try it and I do.  I also realize that not everyone needs to remain with this way of eating long term. I always suggest people try it as an elimination diet for a month or so. Then try slowly reintroducing foods here and there to find out specifically what your food triggers are. I fully believe most people do have triggers in their diet they’re unaware of. Although it’s worth saying not likely nearly as many as I do.

Who should definitely try the carnivore diet?

But if you’re sick, diagnosed with things like fibromyalgia or diabetes this could be a long term solution. This is great for problems that are considered to have no cure. Chronic pain, blood sugar issues, heart issues, and more can all be aided by eating this way. Just be aware it’s not an easy, quick fix. There will be a long process of ups and downs but things will get better as time goes on. 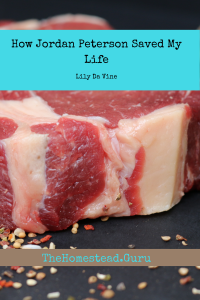 Check out this old post about me clearing up my acne with the carnivore diet!