The US spends more per capita on healthcare than any other nation on the planet(R), at over $1 Trillion/year with costs growing.   Over 3/4 of those costs are related to the treatment of chronic disease, such as autoimmune disorders, cancer, diabetes, alzheimers, autism, cadiovascular disease, etc.(R)  The rates of all such diseases are growing, not decreasing, so obviously the true causes of these problems aren’t being addressed.   If you were to try and describe virtually all forms of degenerative disease with just one word, that word would be “inflammation”. (R)  The research is very clear about this fact.  When examining the prime factors behind the surge in inflammatory issues there are principally 3 things that stand out as different about today versus 25 years ago.  Those 3 things are the widespread consumption of RoundUp laden genetically modified food and wheat (R)(R), wireless technology (R), and a surge in the number of vaccines given relative to years past (R).   The biological effects of each of these technologies is understood well enough to help put the pieces together and begin to understand how their effects may work synergistically to promote the chronic inflammatory disease epidemic we’re firmly in.

Monsantos RoundUp Fuels Alterations in Our Gut Ecology, And These Alterations Can Inflame Our Nervous System 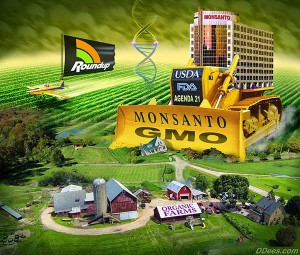 In a previous blog post, “Synergistic Destruction: How Vaccines and GMOs Converge to Fuel Autism and Neurodegenerative Disorders“, I provided a heavily referenced explanation for key factors driving neurodegenerative conditions with a particular emphasis on autism.  The gist of the article is that genetically modified food, through its contamination of Monsantos roundup residue was leading to gut flora alterations(R)(R)(R) which break down the gut barrier (leaky gut) initiating inflammatory processes within the brains of susceptible individuals.  The fire embers of leaky gut driven brain inflammation could then ignite into significant and persistent brain inflammation through the introduction of vaccines and express its effects in much of what is seen in autism, alzheimers, ALS, MS, Parkisons, etc.  It is recommended that you first read that post before reading this.

Microglial Activation is a more descriptive term used to describe immune system activated inflammation of the nervous system.  In short, it refers to how the microglia, the resident immune cells of the nervous system, shift from a beneficial state of surveillance and repair, into a state of breakdown and inflammatory destruction.  They do this through the excessive release of destructive immune messaging molecules (cytokines) and excitatory neurotransmitters (glutamate).   The fulcrum by which these cells shift from the beneficial to the noxious state rests upon the ability of the cells to maintain adequate amounts of the chemical called glutathione.   All cells produce glutathione, but maintaining optimal levels can be a challenge for various reasons including, genetics, nutrient status, toxic body burden, and gut flora health.  As glutathione levels wane, the immune cells both within the periphery of the body and within the nervous system tip the fulcrum of balance towards inflammatory destruction.(R)

Melatonin:  The Premier Protective Molecule of Our Body is Depleted By Modern Technology. 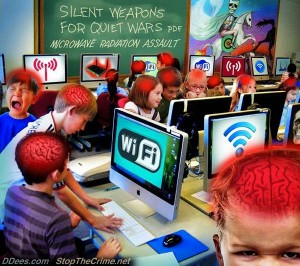 In a recent blog post, (advisable to also read first), about the many biochemically important functions of melatonin, I describe how melatonin is a key which turns on a cellular switch called “NRF2” that triggers cellular production of many key antioxidants, including glutathione.   In addition, you’ll see that altered gut ecology driven in part by Monsantos RoundUp residue can compromise production of melatonin.   This compromise in production is further hindered by fluoridated water calcifying the melatonin producing pineal gland(R), night time artificial light exposure (R), and what is produced is being burned up through the overproduction of free radicals upon exposure to the sea of electromagnetic wireless radiation we commonly find ourselves immersed in.

Research strongly suggests that EMF exposure generates excessive peroxynitrite (R), a potently destructive free radical, and peroxynitrite is scavenged by antioxidants including melatonin.   Upon on examination of the volumes of research evaluating the protective and antiaging effects of melatonin, it is no exaggeration to call it our bodies premier protective molecule.   Big pharma knows all about this which is why they’re working on developing drugs modeled around a similar, chemically distinct, altered form of melatonin that they can patent.(R)

Here’s where things get more interesting.

When examining inflammatory, especially autoimmune, disorders there is a wing of the immune system cells that are overexpressed or under suppressed.  The expression is shaped by the immune messaging molecules called “cytokines”.  Different cytokines lead to different branches of immune system expression. The immune system was once thought to be divided into TH1/TH2 balance, where TH 1 is principally characterized as the immune defense within the cells and TH2 as immune defense outside of the cells.  More current research now recognizes another subset of immune cells called TH 17 that appears to be the most destructive component of the immune system when it’s not brought into balance.  You’ll find the proinflammatory TH 17 elevations in autism(R), alzheimers (R), ALS (R), cancer (R), cardiovascular disease (R) Crohns disease (R), Hastimotos thyroidits (R), Graves Disease (R), MS (R), Parkisons (R), rheumatoid arthritis (R), lupus (R), psoriasis (R), seasonal allergies (R), and likely every other autoimmune disorder that exists.

TH17 function is important in immune system memory and helping our bodies to eliminate certain types of infections, but when the body isn’t able to turn down this component of the immune system the cells literally become wrecked through persistent inflammation.  It is very important to note here that vaccines are known initiators of TH17 activity, and this activity through the introduction of various pathogens, not to mention adjuvants (additives within vaccines), may drive persistent TH1/TH17 activation.(R)

How all of this relates to melatonin is that a recent study titled, “Melatonin Lulling TH 17 Cells to Sleep“,  published in the journal “Cell” describes how melatonin turns the key cellular switch to dampen an overproduction of TH 17 cells.  The authors of that study go on to state,

“Over the past 50 years, there has been a steady rise in the incidence of autoimmune diseases such as MS, RA, psoriasis, and IBD, particularly in developed countries. Recent studies have uncovered many environmental stress factors associated with the modern life contributing to the development of inflammatory disorders… It is tempting to speculate whether the invention of artificial lights—which facilitates chronic circadian disruptions—could have contributed to an imbalance between the inflammatory and regulatory responses of the immune system, leading to immune dysregulation.  The current study establishes a clear link between melatonin, a hormone involved in the regulation of the circadian rhythm, and the inhibition of proinflammatory Th17 cells, thereby shifting the balance of the immune response toward immunosuppression.”

Good health is all about balance.

While many people think that immune system function is all about “boosting” function in terms of maintaining health, the reality is that it’s about maintaining proper balance within the immune system.  Too much immune system response is characterized by autoimmune disorders of persistent inflammation which extends beyond the presence of a pathogen within a tissue on the TH1 end, or environmental allergies on the TH2 end, particularly when coupled with elevations of TH17 on either end.  Too little immune system function is characterized by infections or metastatic cancers consuming the body.  What we want to achieve is balance, and that balance is principally maintained by producing adequate numbers of T Regulatory cells and keeping TH 17 overproduction in check.  Not only does melatonin suppress overproduction of the TH 17 cells, it increases the production of T regulatory cells which also keep overreactive sides of both TH1/TH2 in check.(R)  Research shows that maintaining glutathione levels helps to maintain adequate numbers of T regulatory cells(R), and as I pointed out, it is melatonin that serves as our bodies primary key in turning on glutathione synthesis via NRF2 stimulation.  As I said,melatonin is our bodies premier protective molecule.  The end result of persistently low melatonin is increased toxicity and increased inflammation, exactly what you don’t want when you consume toxins within food, or are injected with inflammation inducing vaccines.  Noteworthy and common nutrient deficiencies which can combine to directly worsen this imbalance include vitamins A, D, and selenium.(R)(R)(R) 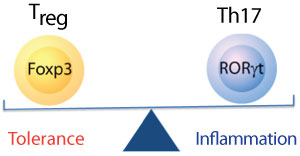 It begins in the gut.  Alterations within the gut flora are occurring in large part through the consumption of RoundUp residue in genetically modified food, not to mention sugar/HFCS processed food and overly prescribed antibiotics.  This gut flora alteration is commonly characterized by an overgrowth of pathogenic bacteria which break down the lining of the gut.  Furthermore, the gut flora alterations then compromise the ability for the body to make the raw ingredients for melatonin production, namely tryptophan and serotonin.  The lining of the gut is maintained, in part, by melatonin(R).  As the microbes and their waste products seep into the blood stream the immune system within the periphery of the body releases inflammatory molecules which begin to promote proinflammatory activity in the nervous system.  This proinflammatory activity state is called, microglial activation.  The microglial cells being the primary immune cells of the nervous system are prone to shifting from a beneficial state of repair and surveillance into a destructive state of inflammation when they lack adequate amounts of glutathione.   Likewise, glutathione also plays an important role in maintaining adequate levels of T regulatory cells which help to prevent excessive production and response of the immune system.  It is melatonin which turns the switch on  for cellular glutathione production via a cellular switch called NRF2, and thus not only plays an important role in preventing and repairing leaky gut, but also prevents the immune system from shifting into a destructive and proinflammatory state systemically.

The preceding paragragh serves as the biochemical background for millions of Americans right now.   We can all recognize that not all people quickly succumb to rapid adverse reactions to vaccines.  Some do, which is why over $2 Billion have been awarded in the “vaccine court”(R), as those cases are easier to prove clear cause and effect damage in comparison to those injured months or years later by vaccines (R).   It is my contention that the stage for adverse reactions to vaccines is driven by an immune system which has been primed for persistently significant inflammation by those factors which upregulate the TH17 wing of the immune system.  The recent shift within the healthcare system to recommend mercury laden flu vaccines to pregnant women (R) is sure to fuel a greater epidemic of chronic illness as research demonstrates that “intrauterine adversity, characterized by toxicity, can fuel a lifetime of TH17 destructive and proinflammatory behavior“.(R)

The only way to avoid the worsening of the catastrophe of chronic illness is through education and action.  This isn’t a call for an Amish revolution.  The reality is that we don’t need GMO food to feed the world, and the frequencies being used with wireless technology could, in theory, be replaced with health promoting frequencies, or fiber optic connections.  Likewise, if you believe in vaccination, I’m not against taking that right away from you, nor am I overly concerned with the fact that, upon receiving your vaccine, you may be spreading the pathogens which you believe you’re being protected from.(R)(R) However, if you really believe in vaccines, you shouldn’t have anything to fear from the unvaccinated population, right?