When one enters into the world of organic gardening one of the first things you face is how to deal with pests. The truth is, pests don’t really care if your plant is organic or not, they will target it regardless especially indoors. There are a lot of options for organic pest care but none quite as amusing as ladybugs.

This is a personal story of my own from my days of indoor cannabis growing back in the United States. My partner and I grew indoors for a few reasons including illegality as well as short growing season in the North Eastern United States. 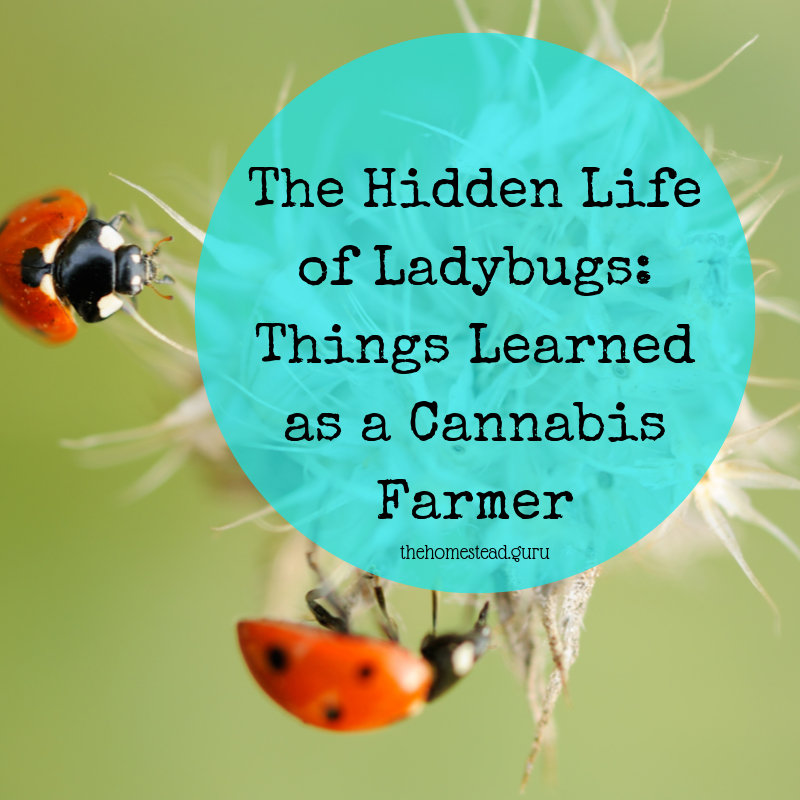 There are a lot of advantages to growing indoor but also a lot of possible things to go wrong. The fact that you have total control of the situation can either work in your favor or against it depending on how attentive and good a grower you are.

You’ve got to worry about everything from light to climate to water and especially pests. While you’d expect it to be harder for pests to flourish indoors you’re wrong on that for a few reasons. Pests literally come inside on you, so if you don’t shower after yard work you’re going to bring pests in to your indoor garden whether you like it or not. And once those pests are there, they are extremely hard to get rid of (especially if you’re an organic gardener). You’re left with solutions like neem oil which can be hit or miss in its effectiveness depending on the source.

The biggest pest you’ve got to watch out for with weed is something called a spider mite. It’s a really tiny bug that sucks the nutrients directly out of leaves and weaving small web covering the buds. These can kill an entire garden if not caught immediately.

One day my partner was inspecting his plants he was growing in the basement. That’s when he noticed the small white spots covering the leaves. Flip those leaves over and you’ll find the tell tale black specs of mites below, robbing the plant of the nutrients we had worked so hard to feed it.

If I remember correctly I was the one to bring the bugs inside. I had both a small garden indoors and one outdoors and I wasn’t very conscious about cross contamination. My little herb plants in the corner seemed the most badly afflicted followed by the young weed plants we were trying to get ready for cloning then flower.

He took to the internet and found all possible organic solutions and ordered all of them. This included a shipment of lady bugs, which we were told loved to eat spider mites. We were willing to do anything to save the crop. The best part about lady bugs? They seemed unaffected by neem oil which was our only other option for pest control.

More from the Homestead Guru: Neem: Your Secret Weapon Against Plant-Eating Garden Bugs + Many Health Benefits(Opens in a new browser tab)

So we waited and they came in a refrigerated box sealed in a bag. When it’s cold they hibernate so they’re stored and shipped cold to make sure you get as many live bugs as possible. If I remember correctly we ordered about 1000 of the little guys.

I was likely most excited for the bugs themselves, my partner just wanted to get the problem under control by any organic means necessary. We opened them up and he released the bugs in our basement garden. We were living in a three story house and expected them to primarily stay downstairs, we were wrong.

We learned some unexpected things from this mass of ladybugs in our home, for example, no two bugs look the same. Every one has a distinct spotting pattern. The bigger ones are generally the females, the smaller the male. They were amusing little creatures and had funny little habits.

The Homestead Guru: Self Sufficient Backyard Gardens are the Way of Life in Northern Italy!(Opens in a new browser tab)

Lots of people have seen videos online of ladybugs following drawn lines and that’s true, they love following a path if they can, even if it takes them in circles. We learned this by watching them on the edge of flower pots. They’d get up there and just run and run and run in circles sometimes for days before being accidentally knocked off by us or another lady bug.

This phenomenon was constant and highly amusing. Because the bugs didn’t stay in the garden, we would notice it all over the home, even in the attic where we spent most of our time. We’d be up there watching a movie then look at our water glass to find one little spotted bug running in circles. Or sometimes we’d find them up there running around and we’d set it ourselves on the edge of a glass to make putting it back in the garden easier. Sometimes we’d forget to take the glass down, leaving the bug running for days. We knew it was the same bug because the patterns were easy to tell apart.

I was constantly delighted by these creatures. I’d spent time covered in them in the garden and found their behaviors to be extremely amusing, that is of course until they started traveling outside of the house.

A cannabis growers number one job regardless of if they’re growing in an area where it’s legal, is to keep the grow private. In places where it’s legal, you keep your grow private to avoid being robbed by people who want your green gold so to speak. So when I was at work and I noticed a lady bug on my arm, I was a little freaked out to say the least. My response was to put it in a jar I happened to have and take it home to release back with it’s friends. I kept a jar with me from that point forward, for that purpose because it happened repeatedly.

So there you have it, for all the organic pest control options lady bugs are the most fun. If you do ever decide to use them outdoors, it’s advised to build a mesh tent of sorts to keep them contained or just expect to be doing a lot of random lady bug releases.

Editors notes: The Mall of America released 72,000 lady bugs to help maintain their plant life inside the indoor ecosystem!

“In order to deal with pesky aphids, which destroy plants by eating them, the mall managers decided that bringing in commercial pesticides would be too harmful to their customers and plants. Instead, they decided to create a natural biological defense system-by calling in the ladybug troops. The ladybugs naturally attack aphids, who pose a threat to the longevity of the mall’s 400 trees and other plants.”