As societies progress, they adopt new customs leaving the old traditions in the past. Is Native American cuisine history?

Save for places with strong indigenous culture, native food diets are being left behind. This is especially true in the United States with Native American traditions.  Colonization essentially destroyed the natives and removed all of their traditions from the American landscape.

But what do you mean by Native American Cuisine?

I live in Mexico where traditional culinary culture is huge and engrained. Here you can find remnants of the old culture. There are even restaurants dedicated to pre-hispanic cuisine in Mexico City. Technically speaking, Mexico is also part of “North America.”  For that reason, it’s worth pointing out that the food mentioned in this article is that which is from those native to the United States.

When I learned to forage I noticed something interesting. There was a lot of information on how to find these foods but vague directions at best on how to prepare them. I kept reading things like “the natives ate this” with no indication as to how they ate it. Knowing how to prepare food is huge for anyone who forages.

Most of the recipes I’ve found featuring foraged ingredients are just modern recipes featuring those special ingredients.  So, it does beg the question, what did the natives actually eat? Well, two chefs in Oklahoma have started to work on answering that question.

When I found the story of Nico Albert and Taelor Barton I was instantly reminded of my adventures foraging and living off-grid in Ohio. These two women became friends in 2011 over a shared enthusiasm for keeping traditions alive.

On a Mission to Save Traditional Culinary Techniques

What Nico Albert and Taelor Barton have done is profound and involves a load of research. They are now known for trying to rebuild the knowledge data bank of traditional local Native American recipes. As someone who has personally looked into this topic, there really isn’t a whole lot of information out there as to the traditional way of doing things. It definitely is not easy to access information.

Is it really authentic or something modern with Native American Ingredients?

They had to go to extraordinary lengths to obtain what information they do have to share the most authentic Native American cuisine possible. Even still, their recipes are only interpretations of what once was, and they are aware of that.   They build on traditional ingredients to help develop new and incredible recipes. So there’s a lot of modern “cross-pollination” of culinary ideas using what may be considered ancient ingredients.

The Start of a Native American Cuisine Revolution

And the response has been great. By 2015 they were cooking these sorts of dishes for non-profits and museums. This November will mark their third Native American Heritage Month serving food at the Duet Restaurant in Tulsa, Oklahoma. The event has so far has sold out every time. They serve Native American inspired dishes using the ingredients that would have been used by the natives.

An example of Nico and Taelor dishes is their “persimmon frybread pie” made with Pawnee heirloom corn and crispy sumac crusted snapper with roasted squash, wild greens, sweet corn hazelnut sauce, and pickled blueberries. I remember looking for recipes for sumac specifically, and all I could find was a sort of tea that supposedly was like a natural kool-aid. Had I thought of something like this I might have had a lot more fun foraging.

These two women are reviving a culinary tradition that currently doesn’t really exist outside of archaeologic circles. They focused on Cherokee specific cuisine because that’s what tribe is local to the Tulsa Oklahoma area. To ensure their recipes are as authentic as possible, they’ve had to consult many different sources for their information.  Including scholarly books and papers, historians, archaeologists, and paleoethnobotanists.

Through their research, they found some interesting things. For example, it was believed until recently the Natives didn’t grow crops until the Europeans showed up. Recent archaeological discoveries show indigenous heirloom seed strains found in the US thousands of years old. This includes varieties of corn, beans, squash, pumpkins, and watermelons. There are even 3000-year-old sunflower seeds as evidence of these cultures cultivating the seeds for cooking oil.

Why Abandon Indigenous Cultivars for Other Options?

Cherokee ancestors reportedly grew things like amaranth, may grass, and knotweed to cook as pseudocereals.  Often these are healthier than the cereals they were replaced with. Wild cultivars were replaced because the modern versions are easier to grow and have a higher yield than the wild counterparts. Sugar also wasn’t common in the US. Usually, it was only found in the form of fruits like ground cherries.

The fact is that the ingredients are hard to come by. Many are rare wild ingredients. You certainly won’t find most of them at even a farmer’s market. So the solution is foraging and restorative farming techniques dedicated to keeping these heirloom strains alive and thriving. 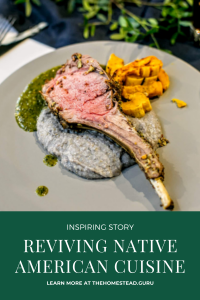 Beyond encouraging local farmers to start growing these specialized crops, there’s a lot more than that to reviving this culinary culture. For example, they adopted nose to tail butchering techniques. This way of butchering aims to use every part of the animal, leaving nothing wasted. Techniques like this are being abandoned thanks to factory farming and the availability of meat.  Also, they use wild-game, which has a totally different flavor and texture profile when compared to modern-day meats like the overbred chicken.

Collaboration with others for Native American Cuisine Revival

I have a personal experience with a Native American bean cultivar known as the Scarlet Runner bean.  This plant bears these big beautiful black and purple beans that come from bright red flowers. Often these seeds are sold as ornamental plants. Yet, every part of the plant is edible. It’s also a perennial plant that grows a tuberous root when allowed to grow into a second season. This plant is often grown in the three sisters garden along with corn and squash. Cool right?

Projects like Nico’s and Taelor’s and others have led to a revival of traditions almost lost. But it also led to a sort of beautiful collaboration between old techniques and new ones for preparing food. I for one am curious to see where this leads, as well as to try some recipes. How about you? 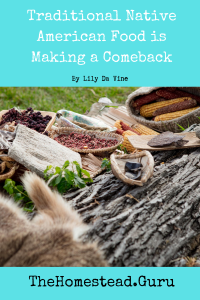 Check out this Homestead Guru post about how Italians do their backyard gardens an alternative culture twist! After all, food comes from the gardens.